March 1
Once again, this weekend we had some exciting fishing about the Lady Pamela II sportfishing boats. On Friday, TJ and I put our anglers on a bunch of blackfin tunas in the morning and we also caught a big bull shark.
On the drift fishing boat, the surprise catch was a sailfish, caught by one of our regulars, Dennis. He fishes with us about three days a week when he is down from New York. We also landed some snappers and a king mackerel. 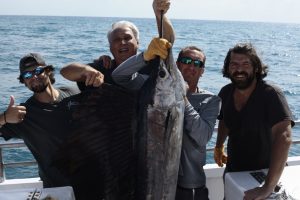 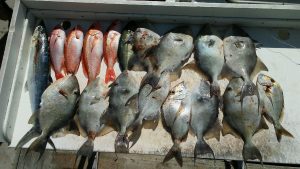 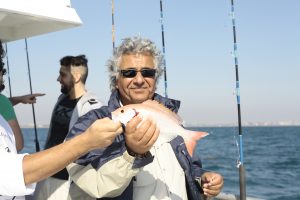 The 18th was the big day, with a couple of awesome, memorable trips for me. Clayton and his girlfriend from Kentucky were out with us we started out catching blackfin tunas just one after another off Fort Lauderdale. They landed more than 15 fish in a short period so we changed gear and put the kites up to try catch a sailfish. We hooked a hammerhead on the 30-pound sailfish tackle and fought him for quite a while before finally breaking him off. We put heavier tackle back out and got a big bite on top. It was a nearly 6-foot scalloped hammerhead that we caught and released. We put the live baits out again but could not a sailfish bite. 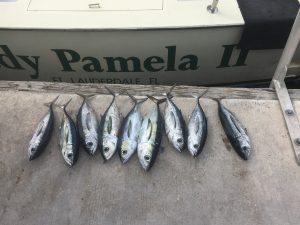 On the afternoon charter, mate Hunter and I decided we were going to start straight out for big game as John from Oregon didn’t care what he caught so long as it was a big fish. We went straight out to 350 feet of water where there was a smoking north current and southeast wind. It took about two hours, but we hooked up a 7 1/2-foot hammerhead shark that we tagged and released. We then moved in to a couple of shipwrecks and had John muscle in a couple of 50 lb plus amberjacks. From thee trolled back in, boating a couple of blackfin tunas and a nice wahoo to finish up a great south Florida fishing day. 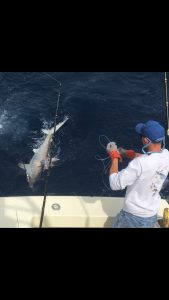 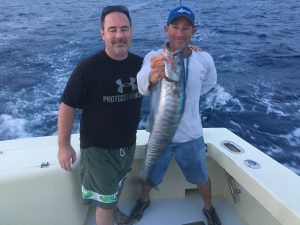