June 25, 2015
The past couple days the Florida Current (that part of the Gulf Stream system that flows generally from the Gulf of Mexico along the Florida east coast to the Atlantic Ocean) has been flowing very close inshore. As a result, we caught some mahi-mahi surprisingly close to shore earlier in the week. This morning the Lady Pamela II was again fishing in blue water in 110 feet of water that produced a nice sailfish in the first 10 minutes of trolling. Fishing overall has been very productive as we have seen a mixed catch of bonitos, kingfish, and blackfin tuna. There are some sharks around but we have not done any targeted shark fishing this week. One five foot reef shark was caught and released during the yesterday afternoon charter while trolling the reef edge. 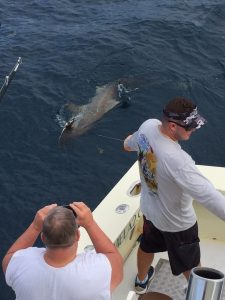 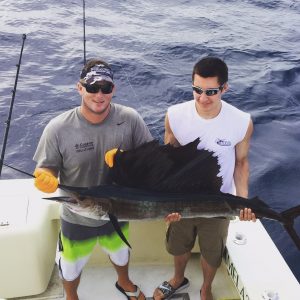