One Drop, One Bite, One Fish!

I have been telling my customers that this is one of my favorite times of the year to go swordfishing and for good reason. The fish are typically much bigger than our summertime fish and there aren’t as many boats fishing for them, so much less pressure.
Yesterday, we had planned to go night swordfishing with a departure of around 5pm and fish into the night. We rigged our squids, lights, and even had live baits ready, but when are customer asked if we could go earlier, we changed up the plan slightly.
With an earlier game plan, we decided to make a few drops into our daytime spots until the sun set to our west. Deploying night tactics while the sun up is usually uneventful, so it is key to change up the strategy and target the fish where they hang during the day, which is usually about 1200-1600 feet below the surface. They don’t come up to the surface until it is dark and even then, they still may be hundreds of feet below.
With a couple hours until dark, our captain and crew decided to make the deep drop and boom! The rod tip bounced a couple times and we were tight!!
With the rod bent over and line screaming, we knew we had a big fish on and a long way to go. The bite happened over 1000 feet below the surface, so we had at least that much line to gain back.
With an experienced angler and some great work of the boat, we were slowly able to inch the fish to the surface. She gave us a look and that was all our mate needed to sling the harpoon into her. It was pretty much game over from there.
With a frisky fish on the other end of the harpoon, the mate put a gaff into her to seal the deal. We knew we couldn’t get her over the side of the boat so we opened the door and with a count of 3 our customer and mate and used all their muscle and adrenaline to get her in. 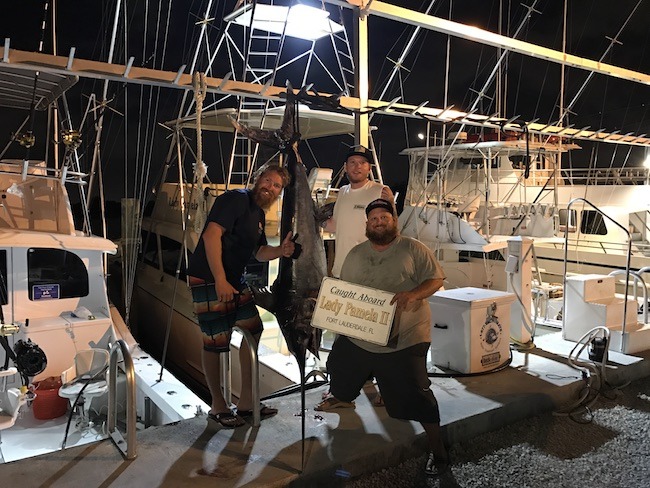 With night approaching, we asked the customer if he was ready to catch another and he decided he had plenty of fish to eat and one was enough. What great sportsmanship showed by our customer.
The captain turned the bow to the west and headed back for the inlet.
Word traveled fast over the radio amongst captains and our colleagues in the area that local news stations picked up on it and when we got back to the dock, we were greeted by flashing lights and cameras rolling. 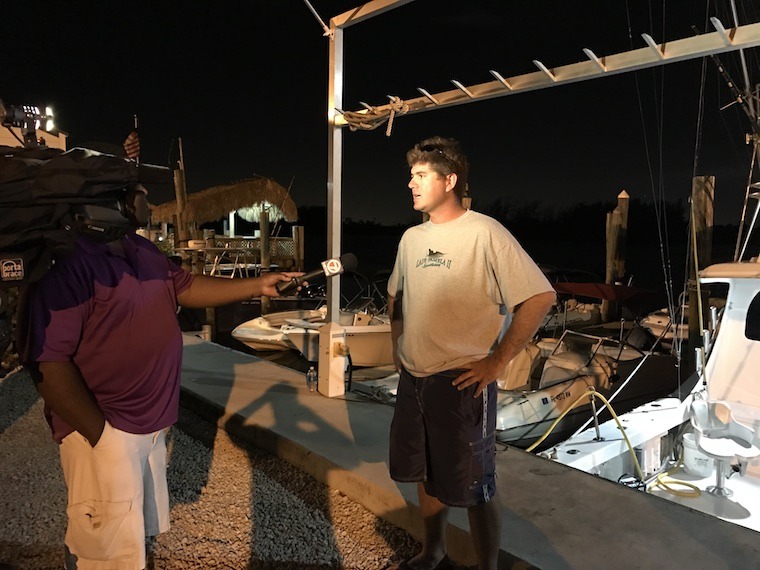 Our friends at WSVN interviewed us and aired the exclusive on the 10:00 news that night.
If you have never caught a swordfish or seen one in person, I highly recommend you try it.  They are truly amazing creatures and seeing their large eyes and sword before your own eyes is surreal.
Tight Lines and Great Fishing,
Captain David